﻿ ﻿ MINISTER ÖZER IS IN PARIS FOR THE TRANSFORMING EDUCATION PRE SUMMIT ﻿ ﻿

MINISTER ÖZER IS IN PARIS FOR THE TRANSFORMING EDUCATION PRE SUMMIT

Minister Mahmut Özer held his first meeting with OECD General Secretary Mathias Cormann as a part of his program in Paris where he will attend the Transforming Education Pre Summit organized by UNESCO.
﻿ 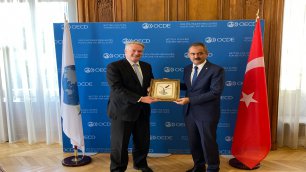 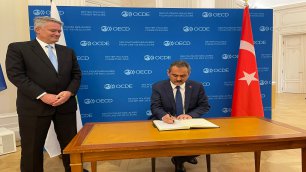 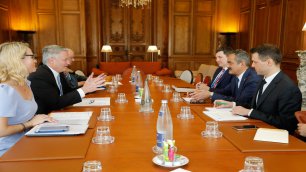 Minister of National Education Mahmut Özer gave information about Türkiye's education projects and campaign during his meeting with Mathias Cormann at the OECD Headquarters.
Minister Özer stated: "The Organization for Economic Cooperation and Development (OECD) provides a platform where member states share their political experiences, seek solutions to common problems and observe best examples. One of the fields of activities carried out under the roof of OECD is education. It is clear that Türkiye has been witnessing a big transformation in education like it has in all fields in the last 20 years.  Türkiye was 70 years late to complete the globalization process in production that many OECD countries achieved in the 1950s. Schooling rate among 5 year old children in the 2000s was 11 percent and this figure exceeded 90 percent recently. Net schooling rate in higher education increased from 14 percent to 48 percent. In other words, more than 90 percent of the population at school age has been attending education in Türkiye in the last 20 years."
Noting that two different segments of the society benefited most from this improvement, Minister Özer stated that socioeconomically disadvantaged and female students were crucial in maintaining equal opportunities in education and for the first time in the history of the Republic, the number of female students exceeded the number of male students.
"It is the indicator of improvement achieved in the last 20 years in education. Moreover, we have completed the democratization process of education. We have lifted the ban on headscarves in higher education," stressed Özer.
An education system that responds social demands was built in the last 20 years
Stating that Türkiye achieved to build an education system that responds to social demands in the last 20 years, Minister Özer said that a large education system including approximately 18 million students and 1,2 million teachers is based on quality of education.
Özer also shared information about recent OECD's Programme for International Student Assessment (PISA) survey results and noted that despite being one of the countries that has a gradually increasing number of 15 year old students, Türkiye is the only country which increases its performance in reading skills, mathematics and science.
Özer stressed that students who are ranked among low skill level in previous PISA reports achieved to be ranked higher in recent reports.
"Türkiye maintained and improved the quality of education despite its increasing number of students. We have defined prior targets. Despite improvements in our education system, we are still having problems in success differences between different types of schools. We adopted two approaches; reinforcement of preschool education and decreasing opportunity differences among schools," said Özer.
Özer went on to say that, "In August 2020, the schooling rate among 5 year old children was 78 percent. We set a goal to reach the OECD average in preschool education schooling rate. Within this framework, we have decided to open 3,000 new kindergartens and 40 thousand new preschool classrooms. We will increase the schooling rate among 5 year old children to 100 percent. As of today, the schooling rate among 5 year old children reached 93 percent," said Özer.
Equivalent of dual education in Germany is vocational education centers in Türkiye
Özer mentioned improvements achieved in vocational education centers in Türkiye which are the equivalent of dual education in Germany.
Minister Özer stated that amendments in the vocational education law turned these institutions into centers of attraction for both employers and students and the number of students enrolled in vocational education centers increased from 160,000 to 530,000 within six months.
"Another priority of our Ministry is the training programs for teachers. We consider supporting the professional improvement of teachers as the main element of maintaining equal opportunities in education. Due to this reason, we have passed the Teaching Profession Law that encourages lifelong training of teachers," said Özer and explained the career steps defined in the newly passed law.
He added that the goal of his Ministry is to offer quality of education to all children in the country and raise generations free from all kinds of addictions including digital addiction.
Cormann: Türkiye achieved important progress in education in the last son 20 years
Meanwhile, OECD General Secretary Cormann said that young generations are key to a successful life adding that, "Türkiye achieved important progress in education in the last 20 years. We will continue to support your country in your projects for disadvantaged groups based on success in PISA. We support your views and projects about students with special needs and lifelong learning. We are planning a summit about vocational education which will be hosted by you. We believe that it will be useful to exchange experiences. We are closely following education campaigns in Türkiye, especially vocational and technical education."
Minister Özer told Cormann that the private sector is happy about the developments in vocational education and added that Türkiye is aiming at enrolling 1 million students in vocational education by the end of this year.
Permanent Representative of Türkiye to the OECD Ambassador Kerem Alkin and Director General for European Union and Foreign Affairs Hasan Ünsal were also present at the meeting.
Minister Özer will address Education Ministers at the round table session set for tomorrow
Minister Özer will address Education Ministers at the round table session during the Transforming Education Pre Summit organized by the United Nations Education, Science and Culture Organization based in Paris as a preparation meeting of the upcoming Transforming Education Summit set for September 19, 2022. Approximately 100 education ministers and 50 deputy ministers of education are attending the pre summit.
Transforming Education Pre Summit
Türkiye, which is a member of UNESCO's Executive Board between 2021 and 2025, is a part of the decision making mechanism concerning global education, science and culture policies. Within this framework, it will play an important role in the transforming education policies which will be discussed during the pre summit.
The overall objective of the Pre Summit is to harness the evolving discussions on transforming education, elaborate initial content and establish a shared vision and suggested actions for the Summit, and generate greater momentum.

Minister of National Education Mahmut Özer got together with provincial directors of education of all 81 cities of the country and [...]

10,000 SCHOOLS IN BASIC EDUCATION PROJECT WILL BE COMPLETED BY THE END OF AUGUST

10,000 Schools in Basic Education project is about to be finalized. Physical environments of disadvantaged primary and secondary schools [...]

"Vocational and Technical Education Cooperation Protocol" was signed between the Ministry of National Education and İstanbul Teknopark [...]