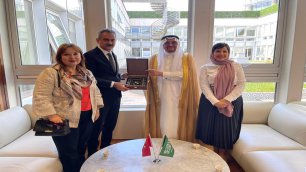 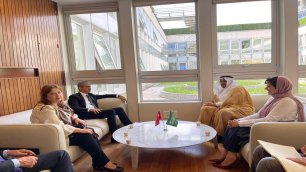 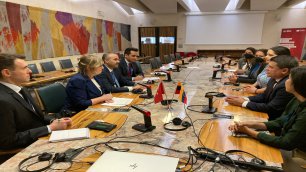 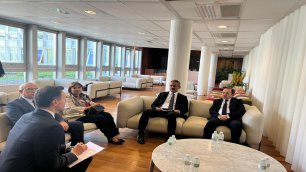 Minister Özer held his first bilateral meeting with the Algerian Minister of National Education Abdelhakim Belaabed. Noting that boosting relations with African countries in recent years is a success story of Turkish foreign policy, Özer said that the most important component of this success story is intense partnership between two ally countries Algeria and Türkiye.
Özer stated that Türkiye has had a historical, deep-rooted and multi-dimensional relationship with Algeria for more than five hundred years adding that education relations between two countries are at a satisfactory level.
Özer mentioned that Algerian President Abdelmadjid Tebboune had important negotiations with President Recep Tayyip Erdoğan as a part of High Level Cooperation Council meeting adding that total of 15 agreements including Memorandum of Understanding concerning Cooperation in Education and Training and Memorandum of Understanding concerning vocational education were signed as a result of this meeting.
"Cooperation in education provides the opportunity to exchange experience. We are happy that negotiations of our Ministry, the Ministry of Foreign Affairs and Turkish Embassy in Algeria for opening an international Turkish school in Algeria resulted in mutual agreement," said Özer.
Minister Özer stated that it is important to support Turkish education and teaching Turkish abroad and he will be happy if Algeria decides to include elective Turkish lessons in the curriculum of their schools.
Noting that cooperation between schools of two countries can be boosted by establishing sister school partnerships, Özer went on to say that; "We will share our experience and knowledge about this subject. We will also be happy to share our experience in vocational education. I believe that our existing relationship based on brotherhood and mutual trust will get deeper in the future."
Özer got together with the Chairperson of the Executive Board of UNESCO Tamara Rastovac Siamashvili
Later, Minister Özer got together with the Chairperson of the Executive Board of UNESCO Tamara Rastovac Siamashvili.
Özer said that the large participation of the Ministry of National Education in the Transforming Education Pre-summit is the indicator of Türkiye's wish to boost cooperation under the roof of UNESCO.
Stressing that there is a need for international solidarity in order to maintain sustainable education for everyone under any circumstances as education faces many hardships such as pandemic, economic problems, conflicts and clashes, Özer went on to say that, "As a member in UNESCO's Executive Board, Türkiye is ready to make contribution to the transforming education and share best practices. Our country achieved important success not only in digital transformation, training programs for teachers and equal opportunity in education but also in educating refugee children. Our country did not waste time to start distance education for every student in the entire country during the pandemic."
Özer said that Türkiye made important investments both in terms of technological infrastructure and education, adding that it is ready to take a part in any joint project under the roof of UNESCO.
Minister Özer had a meeting with Saudi Arabian Minister of Education Hamad Al Shaikh
Minister Mahmut Özer held a bilateral meeting with the Saudi Arabian Minister of Education Hamad Al Shaikh.
Minister Özer noted that relations between two countries have entered a new cooperation phase after President Recep Tayyip Erdoğan's visit to Jeddah between April 28 and 29, 2022 adding that, "Our cooperation reached a higher level after our meetings in Ankara this month. I believe that we will rapidly boost our relations when we work together in the future. We consider this development as a result of deep historical and cultural ties between our countries. "
Reminding that Turkish schools which played the role of friendship bridge between the people of two countries were closed down a while ago, Minister Özer said, "Our people living in Saudi Arabia and 2,500 students were benefiting from our schools located in eight different cities. We previously had meetings between two ministries about the reopening of these schools. We hope that we will rapidly finalize these talks and open schools again."
Özer stated, "Our children abroad are as valuable as our children living in Türkiye. Allowing them to lead virtuous, educated and happy lives is among our main duties. Turkish schools abroad are important instruments that allow us to achieve our goal. Our common purpose is to provide equal and quality of education to our students."
Noting that signing the Memorandum of Understanding Concerning Cooperation in Education will be an important step in the reopening of Turkish schools, Minister Özer said that they have submitted the recent view of the Ministry of National Education on the issue to the Ministry of Foreign Affairs for its submission to Saudi Arabia.
Meanwhile, Saudi Arabian Minister Hamad Al Shaikh said that they have a positive approach to the idea of opening Turkish schools in his country again adding that, "Riyadh Embassy is working on this issue. I wish to get together again soon in order to discuss this matter."
Meanwhile, Deputy Minister of National Education Petek Aşkar had a meeting with the Vice Minister of Educational Communities and Union with the People of Venezuela Wuikelman Ángel Paredes and exchanged views about education relations between two countries.

Minister of National Education Mahmut Özer got together with provincial directors of education of all 81 cities of the country and [...]

10,000 SCHOOLS IN BASIC EDUCATION PROJECT WILL BE COMPLETED BY THE END OF AUGUST

10,000 Schools in Basic Education project is about to be finalized. Physical environments of disadvantaged primary and secondary schools [...]

"Vocational and Technical Education Cooperation Protocol" was signed between the Ministry of National Education and İstanbul Teknopark [...]