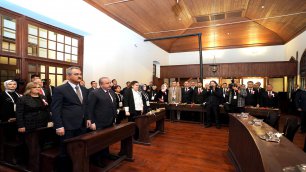 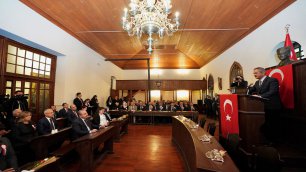 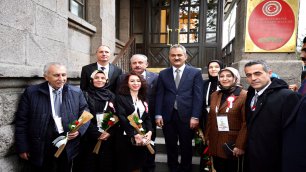 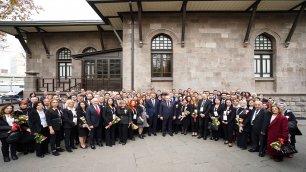 Şentop wished health, success and peace to all teachers and congratulated the Teachers' Day and reminded that the first Parliament of Türkiey was opened 102 years ago as a result of great sacrifice and effort of our nation.
Şentop reminded the poverty of that period and went on to say that:
"There were no bricks at the roof of this building when they had decided to open it as the Parliament. People dismantled the bricks out of their own roofs and built this roof. These gas lambs were taken from coffeehouses. Teachers and students of the poor country which was torn due to wars carried these desks from the streets of Ankara. I wanted to host you here to feel that history and mentality and start this meaningful day at the first Parliament where our first Parliament Speaker Mustafa Kemal Atatürk was named as the "Head Teacher."
Şentop commemorated all teachers especially who were martyred on duty with respect and gratitude and said, "There were lights that illuminate the darkness and now they are the martyrs whose souls are blessed with light."
Stating that they consider teachers as the luckiest people in the world, Şentop said that teaching is a special profession that changes lives.
"Biggest richness of Türkiye is its people"
Şentop noted that the future of the country and the nation is shaped under the responsibility of teachers adding that, "I sincerely believe that you enjoyed the success of your students and could not find peace unless you find a remedy to their problems."
Stating that biggest richness of Türkiye is its people, Şentop went on to say that:
"It is important to undertake the responsibility of raising generations who compete with the world and aim at working for the benefit of all humanity. We have many pioneer names that successfully fulfilled this mission in the education history of our country. It is an honor for us to see that there are teachers who work with sacrifice with the same mentality and who are aware of their duty for the society."
"Humanity will survive as long as teaching profession exists"
Parliament Speaker Şentop reminded that there has been big changes and transformations in the production, communication and transportation technologies in the 21st century adding that, "Technologic developments will claim the end of many professions but humanity will survive as long as teaching profession exists."
Şentop said that teachers must keep in pace with the developments in their profession and update their knowledge according to the needs of rapidly changing world and noted:
"It is your responsibility to raise students as individuals who use the digital world wisely. Children and youth are facing two new threats namely violence and isolation in these new times. We are happy to see that we have two important forces, the eternal care and compassion of teachers and our strong family structure, that protect our children."
"Our teachers will raise students who adopt türkiye vision"
Meanwhile, Minister of National Education Mahmut Özer expressed his sorrow about the teachers who were martyred during terror attacks and began his speech by commemorating teachers (Ayşenur and Arzu) martyred during a rocket attack in Karkamış and bomb attack at the İstiklal Street.
Özer reminded that Ayşenur Alkan took all children to the shelter and was martyred when she returned in order to see if there was any student left in the school and added that this behavior revealed the basics of teaching profession which is sacrifice and seeking the best benefit of students.
"Each teacher is a flag and anywhere there is a teacher is a homeland," said Özer.
Özer noted that there are 19.1 million students and 1.2 million teachers in the education system and this figure is higher than the population of many countries.
Özer went on to say that: "These devoted teachers are working day and night in order to raise our children who would be the architects of our future. We are grateful to all teachers for their hard-work and sacrifice. Our teachers will raise the children who adopt Türkiye vision in line with the Türkiye's Century mentality recently declared by our President Recep Tayyip Erdoğan. "
Minister Özer congratulated the Teachers' Day of all teachers, commemorated all martyred teachers with respect and gratitude and thanked Parliament Speaker Şentop for hosting and receiving them.

MINISTER OZER MET WITH MINISTER OF EDUCATION OF AZERBAIJAN AMRULLAYEV

Minister of National Education Mahmut Özer met with the Minister of Education of Azerbaijan Emin Amrullayev in Baku for the reinforcement [...]

Minister of National Education Mahmut Özer visited the Alley of Honor (Fahri Hıyaban), where the graves of former President of Azerbaijan [...]

Minister of National Education Mahmut Özer stated that hospital classrooms will be opened in every desired point in 81 provinces for [...]